Over 1000 roses in our catalogue

Hybridising Roses - How a Peter Beales rose is bred 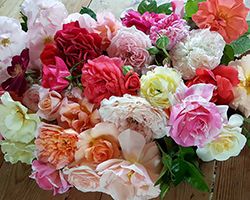 How are new roses created?

New roses are created through hybridisation, which is the art of crossing 2 different roses to produce a completely new variety.

Hybridising is not to be confused with budding, which is a way of cloning an existing rose, much like how growing plants from cuttings is also a way of cloning. To find out more about how to bud roses please click here.

Our goal is always to try to breed the perfect rose. One which is strong and healthy, of a fashionable shape and colour, heavily scented, repeat flowering and has a good growth habit.

It is quite easy to breed a nice rose with a good scent, but it might be prone to disease; or an unusual coloured flower on a weak plant; or even a really healthy rose that never flowers. The art therefore, is not just in the breeding, but about being able to recognise and select that one award winning rose seedling from the thousands of other seedlings that aren’t quite strong enough. For every 50,000 seedlings grown, there could be as few as three seedlings that are of a high enough standard to be launched as a future Peter Beales rose. 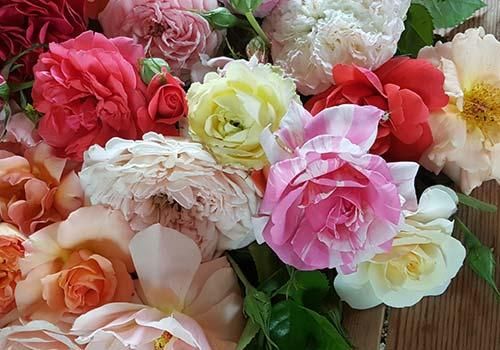 How do we breed new roses?

The first job is to select the plants that we wish to cross. These are called parent plants and the breeding team are always assessing varieties and seedlings for their breeding potential. The parent plants are then brought into the controlled environment of a glasshouse during February, to be encouraged to flower earlier. This gives the hips the best possible chance to ripen fully later in the year.

Once the roses burst into flower it really is a race against the clock! Our day starts early, before the pollinating insects (mainly bees) become active. From the unopened flowers of the mother plant, the petals and anthers (the part that holds the pollen and attracts the insects) are removed, leaving only the stigma. At the same time anthers from other Roses are collected into Petra dishes, which are then labelled and laid out in a controlled environment. This encourages the anthers to release their Pollen. If needed these can then be stored in a fridge for a few days, so that we always have pollen when required.

By late afternoon or early evening the prepared flowers of the mother plant from earlier in the day will hopefully have matured enough to accept the pollen. You can tell when they are ready because the stigma will become damp and sticky. In very hot, dry conditions though, this may not occur until early the next day after the cool of the night. Meanwhile hopefully the anthers from the father plants will have released their pollen looking like coloured talcum powder into the Petra dish.

Now comes the fun bit! The selected crosses are made by painting the pollen of the father rose onto the stigmas of the mother rose with a small paint brush.  Remembering to label each flower as we go in order to know a seeds parentage later. This process is known as hybridisation and hybridising normally runs from late April to around the end of June - 7 days a week!

Once we have finished hybridising, any new shoots are cut out and flowers removed, as well as any hips that have set naturally by insect pollination. This encourages the plants to put all their energy into the hips we have pollinated and allows more sunlight to reach them, which speeds up the ripening.

Did you know? Years ago, before pollination was fully understood, people would plant rows of roses close together so that pollinating insects, such as bees, would naturally create crosses.

The Hampton drop – not all varieties are compatible, so some crosses may fail. When this happens the hips will usually drop off. This normally happens in early July, around the time of the Hampton Court Flower Show. These failures are also recorded for future reference.

From then on until September the plants are watered at least once a day and fed once a week.  When the hips have fully formed, the feeding is slowed down and eventually stopped. The plants are also kept a little dryer to encourage better seed production.

Once the hips have matured they are harvested, being very careful to keep them labelled with seed and pollen parent names. The seeds are then carefully separated from the hips and bagged in either damp Perlite or Vermiculite depending on their size. Once the seed is bagged it is then placed into a fridge until January to replicate winter under safe, controlled conditions. This encourages even germination when sown.

Did you know? Each rose hip (which are the seed heads of the rose) typically contains anything from 3 to 17 seeds and every single seed will be a completely new variety never seen before! This means that if 50,000 seeds germinated, you would have 50,000 new varieties.

The New Year brings about seed sowing, which is sown directly into large compost beds in glasshouses. They will mainly germinate within the next few weeks, but some may take over a year!

It is always amazing to see how quickly a rose may flower after germinating. Often they will flower after producing as few as 4 or 5 leaves! Normally roses that flower in the first season will be continuous or repeat flowering varieties, flowering on new wood.

Did you know? It is naturally impossible to grow a true blue rose, as they lack the delphinidin gene, needed to create the blue pigmentation. Roses advertised as being blue will actually be a shade of mauve. This is worth noting when purchasing blue roses online. Especially from anyone claiming to sell ‘true’ blue cut roses as it is most likely to be a scam and what you may actually receive are roses that have been cleverly dyed or painted. This is also true of black roses, which are also impossible to breed naturally. Some very dark roses are available, but these are usually just dark shades of red.

The plants continue to grow quickly. Gaining in size and flower. Some can even reach 6ft in height within a very short space of time.

From May until July the seedlings are appraised and the best ones are selected, whilst the ones that don't make the grade are rejected. At this early stage thousands of seedlings can be weeded out. The successful seedlings will then be taken to the fields and budded to increase stock. To discover more about budding please click here.

Over the next few years the selected seedlings are carefully analysed and re-appraised by our group of rose experts, until we have selected the very best seedlings to be launched under the Peter Beales name.

Typically, from the moment that we cross the parent plants, to the time that a new variety becomes available to purchase, will take anything from 5 to 8 years. These new releases are normally launched at one of the prestigious flower shows that we attend annually, like the RHS Chelsea Flower Show and each year we launch no more than 3 new roses. 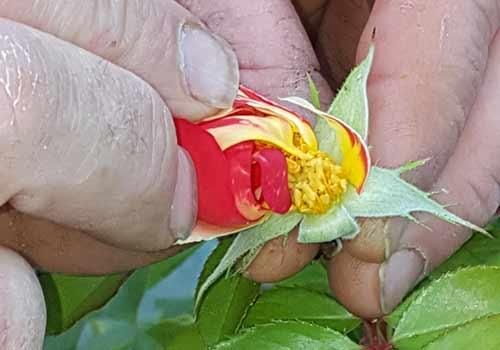