Free delivery for all orders over £100 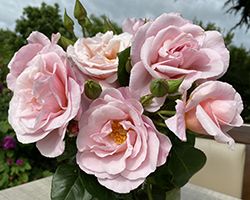 We're excited to offer a sneak peek of our newest rose...

In celebration of the Oxford Botanic Garden's 400th anniversary, we are delighted to be officially launching a new rose for them at the RHS Chelsea Flower Show 2022.

Founded in 1621, the University of Oxford Botanic Garden is the oldest botanic garden in the UK and one of the oldest in the world!

Although the new rose will not officially be available to buy until next year, the beautiful new hybrid was revealed by Oxford Botanic Garden Director Professor Simon Hiscox along with  Peter Beales Roses Nursery Manager Ian Limmer on Sunday 25th July 2021, accompanied by special guest Lord Patton of Barnes.

The New ‘Oxford Physics Rose’ will not be officially launched until the RHS Chelsea Flower Show next year, but in the meantime, we are delighted to share with you some photos, as well as a bit of information about why we love it so much!

Ian describes it best as “A shell-pink shrub rose which has all the characteristics of a classic old-fashioned rose, yet with the qualities gardeners have come to expect from a contemporary rose, such as robust health and vigour." This delightful new modern shrub rose also benefits from being repeat flowering, shade tolerant and suitable for growing in a pot, as well as producing a very strong, sweet fragrance, reminiscent of a classic rose.

More information about the new rose and its big reveal can be found on the University of Oxford Botanic Garden's website by clicking here.