It’s a hard life being a pampered show plant with no show to go to.

It’s been a challenging couple of weeks, with things changing almost daily.

Things started off very relaxed as most of the roses were coming back into growth evenly and in good shape. Many were also showing very early signs of bud initiation.

This can vary and some years plants will come back into growth very unevenly and may have a large percentage of blind shoots that start to grow. Blind shoots are stems that produce no flowering buds, but instead end in a leaf. This is usually due to harsh winter weather, or the age of the plant.

Normally a light pruning will kick start the plant back into growth and isn’t an issue for our show roses, provided we get our timings right! 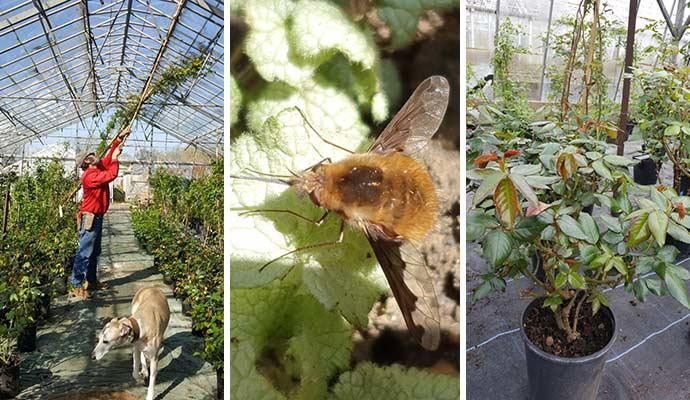 Well, it was nice to keep our heads buried in the sand for a little while, but sadly the news arrived that we were all dreading and expecting.

All early flower shows, including the RHS Chelsea Flower Show have been cancelled.

So from keeping plants warm and pampered, in order to speed up growth and flowering, to suddenly opening up the vents and doors as much as possible to slow growth down.

It feels completely wrong when walking the nursery last thing at night and seeing vents left open for show plants. This shouldn’t normally happen until at least late April!

The aim now is to adjust the growing conditions in order to ready the roses for the Hampton Court Palace Flower Show, in the hope that this event may still go ahead. As it Hampton is held later in the season, this means adjusting the growth of the plants accordingly.

The plants with lots of growth are still in the glasshouses. To harden off before they can be put outside to join the rest of the roses. As I move the roses outside, I try to keep the thirstier one together near the taps. Keeping the plants spaced out in blocks means quicker watering, as well as forming a micro-climate around themselves so that they cope better with hot weather, whilst also cutting down on watering.

Specimen climbers in small pots have also been put onto capillary matting, which holds water for the plants.

The sudden drop in temperature recently put the plants under stress and within 12 hours powdery mildew started to show up all over the place. The plants had plenty of air movement though, as well as being healthy and had recently been given an overhead liquid feed, so the mildew failed to establish and died out.

On a more cheerful note I feel spring is really here now as the seed from the last years hybridizing are germinating and some have even got true leaves showing! Summer warblers are now singing in the hedge behind the nursery and my favourite signs of spring are about, including the odd butterfly and a bee fly, Britain’s answer to a Hummingbird. I’m just watching now for the swallows and their kin.

Well I’d better leave it here for now as I need to grease some vents and oil some doors, as the extra work they are now getting has made them start to complain and squeak.