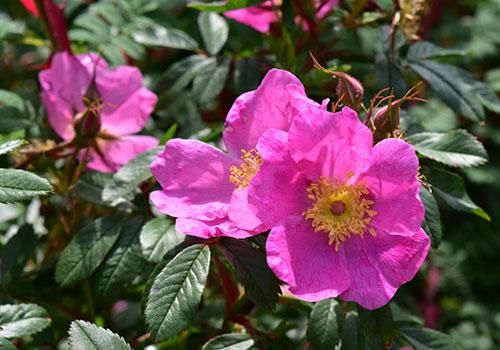 Species roses are becoming a more and more popular choice in our gardens, but what exactly is a species rose? They are best described as wild or pure roses of natural origin, with mostly single flowers. Originating from all around the northern hemisphere, many date back to ancient history and are the ancestors that all modern roses originated from. Rose petals and leaves from species roses have even been known to have been found in tombs belonging to ancient Egyptians. Used within garlands, which would have been worn by loved ones, these were then left in the tombs with the bodies.

These are also the roses that we see in the hedgerows around our countryside. Whilst many of these roses originated from Europe, we have about twelve native varieties growing naturally within our hedgerows. As you can imagine, species roses are very tough and are able to grow in conditions where other roses would struggle. 'Rosa rugosa'for example originates from Asia and grows naturally in sand dunes along the coast.

This ruggedness and ease of care is probably one reason for their rise in popularity. Species roses flower profusely in May and into June and many will then go on to produce wonderful hips in the autumn. Having worked alongside Peter Beales for many years, this reminds me of a story he used to tell me. When he was a young boy, he used to collect rose hips from the hedgerow, as part of the war effort. These would then be sent to be made into Delrosa rose hip syrup, a great source of vitamin C. He was paid only half a crown for a bushel, which was a full sack! He told me this story a few times when we were awarded our annual pay rises.

As well as being able to grow in virtually any type of soil, species roses are also able to withstand high or even very low temperatures, such as -20 degrees C or below. They are also very happy to grow in shaded, woodland areas.

The species collection covers all types of rose, ranging from small shrubs that only grow 1 metre high, to very large shrubs and even rambling roses. A lovely species rose you might want to consider for your garden, if you have the room, is 'Rosa moyesii Geranium'. Easily capable of reaching 3 metres high, this variety has beautiful glowing red flowers with lovely frilly, dancing yellow stamens. The flowers are then followed by elongated red flagon-shaped hips all the way down the arching stems.

If however you are a little more restricted on space and wanted something smaller for your garden, one of my personal favourites is 'Rosa nitida'. Growing to about 1 metre high and slightly less if grown in a pot, this would be suitable for any garden, no matter what the size. 'Rosa nitida' will even grow happily in a pot on a patio. Discovered in North America in 1807, this rose has beautiful deep rose pink flowers, which turn to a rich crimson-purple colour in the autumn. With the added bonus of hundreds of small, pearl-like red hips and wine red coloured foliage that turns to beautiful shades of bright fiery red, yellow and orange, this rose really does offer fantastic autumn interest to your garden.

When it comes down to it, it’s hard not to see the appeal of these roses. Whilst they may not flower continuously throughout the summer like some modern varieties, there is no comparison when it comes to hardiness and ease of care. With unrivalled drought tolerance, disease resistance, shade tolerance and overall health, they make a very attractive option for beginner gardeners and the gardening enthusiast alike. The beautiful simplicity of their flowers and the added interest of a wide and fascinating variety of hips produced in the autumn, like the large black hips of 'Rosa pimpinellifolia', just add to the romance of these roses.

Peter Beales always had such a strong passion for species roses and spent much of his working life trying to save and preserve them. Now that Peter is sadly no longer with us, it is encouraging to see that the interest in these historic and important roses is still strong.