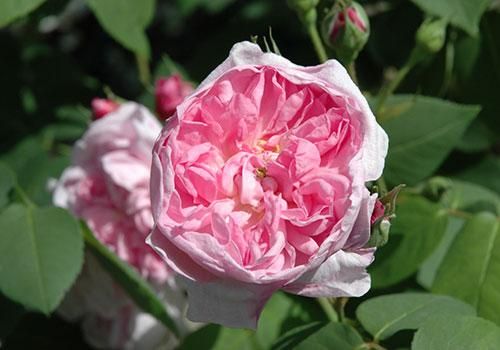 We all have a picture in our minds of how a classic rose garden looks and smells. The masses of beautiful flowers in early summer and the gorgeous scent drifting through the warm summer air.

Typically, the roses that we would describe as ‘classic roses’ are the Gallicas, Albas, Mosses, Centifolias, Damasks and Species. These roses generally tend to have very old origins and often have beautiful, highly scented flowers, will grow happily in any soil condition and are very healthy. Some of these groups are even considered to include some of the most beautiful of all roses. For example the Centifolias, which means “a rose of a hundred petals”. One of my personal favourites, 'Fantin-Latour' is part of this family.  With its height of nearly 2 metres, it sits perfectly in the middle of a border, with beautiful soft pink flowers and a scent to die for. Another rose which is strikingly beautiful, yet slightly more unusual is 'Rosa Mundi', part of the Gallica family, which dates back to the 12th Century. Displaying large, semi-double, crimson flowers, with splashes of white and pink.

The way I look at old varieties of roses is similar to the way that I view strawberries. Strawberries used to have a season and would be available only once a year, roughly around the time of Wimbledon. The taste was superb, probably heightened by the fact that they could only be enjoyed at that time. Now strawberries are readily available right through the year, and I think that has taken some of the enjoyment and excitement away. I worry that this could become the case for the beautiful, mostly once flowering roses, like the Albas, Gallicas, Centifolias, Damasks and Mosses, where, for me, there is a great anticipation for the main four week flowering period during June. A time that is so special and rewarding, that surely it is the most exciting time of the year.

With so many beautiful Modern varieties of roses on offer, which flower continuously right through the summer and well into the autumn, I worry that people may start to miss out on the romance offered by truly classic roses.

I remember when I first joined Peter Beales Roses some 30 odd years ago. When June came along there were so many different types of roses that came bursting into flower and at that time I took a real liking to the modern Hybrid Teas, with their pointed buds and three to four flowers on the end of their stems. There were so many bright and vibrant colours, from reds to yellows, to two tone, most growing to a height of three to five feet, standing straight upright like soldiers.

Peter on the other hand would marvel in the beauty of the more classic varieties, like 'Charles de Mills'. A highly scented dark purple shrub rose abundant with flowers from top to bottom.

As the years went by, whilst Peter was often out on his travels, finding many more treasures and visiting some breathtakingly beautiful gardens, I began to understand why he was so passionate about classic roses. I had fully started to appreciate their charm, character and romance, but above all the history behind every one. Many dating back hundreds of years and hardly a rose looking or growing like another and often producing hips and stunning autumn foliage well into October and November.

These old, classic roses, may only flower for a relatively short period of time, but the displays are breath-taking. Even the anticipation of waiting for all of their many buds to burst open is exciting.

It is also easy to find a home for these roses pretty much anywhere, within any garden. Especially if you have poor soil, where modern varieties may struggle to get enough nutrients for them to grow. They will happily withstand full sun or even partial shade as well and can be placed in the middle or at the back of a mixed border, if they are a taller variety, flowering happily alongside your buddlejas, Ceanothus, philadelphus and peonies and so on.

I have even used some of the taller varieties as climbers on walls before, creating a truly idyllic country cottage scene. Surely then every garden should have at least one classic rose within its borders.